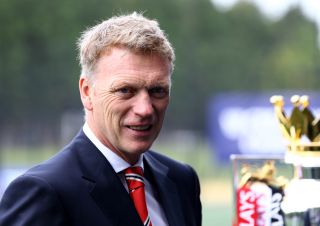 Moyes is also considering whether to include want-away striker Wayne Rooney in the squad for their opening clash against Swansea, after the English forward recovered from a shoulder injury significantly enough to play 65 minutes in the 3-2 friendly win against Scotland on Wednesday.

After a tricky start to their season with a trip to The Liberty Stadium, United are set to face Chelsea at Old Trafford before tough away fixtures against Liverpool and Manchester City in their first five league games.

"It's the hardest start for 20 years that Manchester United have had.

"I hope it's not because Manchester United won the league quite comfortably last year and the fixtures have been made much more difficult.

"I find it hard to believe that's the way the balls came out of the bag, that's for sure."

A Premier league spokesman quashed Moyes' claims: "David has put those concerns to us and we have absolutely assured him the process is random and above board.

"He has accepted those assurances."

Rooney is looming as a bigger issue for the former Everton tactician, with Moyes insisting he will not sell the striker to Chelsea and said the striker will be part of the mix for the opening weekend.

"(There are) no more developments, we don't want any more because we've told everybody (Rooney is) not for sale," Moyes said.

"He got his first competitive minutes (against Scotland) and he hasn't had any other serious action.

"It was a good game for him but I thought Danny Welbeck also had some good match action and I was pleased about that - and Tom Cleverley as well.

"I couldn't tell you right now (if Rooney will feature against Swansea) and I will be back Thursday afternoon and will see how he is after the game."