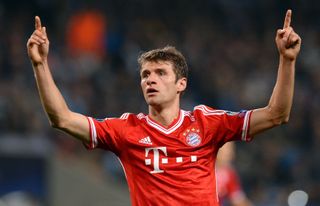 The Germany international was seen in Catalonia recently and was immediately tipped for a move to the Spanish champions, but he has revealed he has no intention of leaving Bayern.

Muller came through the youth ranks at the Allianz Arena and has made 222 appearances for the club since his first-team debut in 2008.

The 24-year-old has a contract with the Bundesliga champions until 2017 and insists he hopes to stay at the club beyond that date.

"I was in Barcelona for personal reasons, but these things immediately appear online nowadays," he told Sky90.

"Of course, it is flattering when you're being linked to a club like Barcelona.

"I am very happy at Bayern, though. Bayern mean a lot to me and have a place in my heart. I hope to stay at Bayern for many more years to come."

Muller has made 17 appearances in all competitions for the club this season, scoring nine goals.