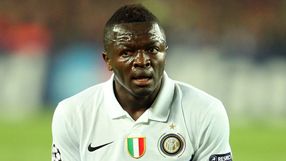 Muntari’s unrest at Inter will have attracted the attention of potential suitors in England, where Muntari had a successful spell with Portsmouth under current Spurs boss Harry Redknapp, winning the FA Cup in 2008.

This could give the White Hart Lane supremo the upper hand in any race to sign Muntari, and while the player’s chief representative Frank Schreier has mentioned that there is interest from La Liga, the Premier League is said to be the Ghana international’s favoured destination.

Schreier told Sport.co.uk: “It could be that he will leave in the January transfer window, we have to arrange a meeting in the next few days in Milan to discuss his future, and then we will know the conditions of a transfer.

“There has been contact from the Premier League, but also in Spain. But for Sulley a return to England and the Premier League is definitely a possibility. I will not speak directly about the clubs involved, but it is the ones who have followed him previously.”

If Muntari leaves Inter, the required fee for his services is expected to be around £8 million, although the possibility of a loan move has not been ruled out.