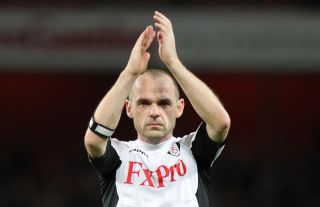 The Cottagers sacked Felix Magath last Thursday - their third managerial dismissal in less than 10 months - after the German oversaw a disastrous start to the new campaign, losing six of his opening eight games in all competitions.

Caretaker coach Kit Symons couldn't stop the rot at the weekend, losing 1-0 to Blackburn, with Doncaster visiting Craven Cottage on Tuesday in the League Cup.

Murphy, now a BBC pundit after retiring in October 2013, has already admitted he would like to return to the club who he made 169 league appearances for and captained in the 2010 Europa League Final against Atletico Madrid.

Speaking exclusively to FourFourTwo, the 37-year-old reiterated his desire to get involved at SW6, but said he would not be putting himself forward for the role.

"I would love to get involved at some point. Obviously it is a bit of a hypothetical one, until you get asked or have a meeting with people. But I would like to get involved. It’s a club where I have so many fond memories, and I have very good relations with the fans," he said.

"It would be a great opportunity but I wouldn’t put myself forward, I’d wait to be asked. I think that’s the right way. Even if they just want to ask my advice, or get me involved in some way, I’d be more than willing to listen. But I’ve not had that conversation yet, so I’m not in the position to have that choice."

Ex-England international Murphy, who started out at Crewe before moving onto Liverpool, Charlton and Spurs, has been taking his coaching badges with a view to moving into management. But he says passion and desire will only get you so far in football, and you need someone to give you an opportunity.

"With the coaching and management side of football it’s not always about the desire to do it, it’s about having the opportunity. There are lots of people who want to work in the game. Desire alone doesn’t get you the jobs, it’s opportunity and someone having faith in you. So we’ll have to watch this space.

"I’m certainly willing, but I’m not desperate. It’d have to be right for me, and a role where I feel I could contribute something. The opportunity might not arise. I just want to prepare myself so I have all the right knowledge and qualifications to give myself the opportunity, should it come along."

Danny Murphy was speaking on behalf of Capital One, credit card company and sponsors of the League Cup.