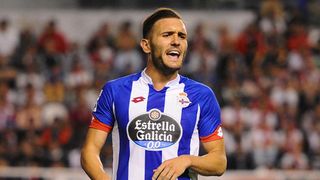 Shkodran Mustafi is confident fellow new Arsenal signing Lucas Perez has all the attributes to be a hit in England and warned Premier League defenders they face an "uncomfortable" experience.

Mustafi has first-hand experience of playing against his new team-mate in LaLiga and believes the 27-year-old can bring the sort of form that saw him net 17 league goals last season to Emirates Stadium.

"He is uncomfortable to play against. He's a good striker - he has everything a striker needs," he told Arsenal's official website.

"He's someone you can play well with. He doesn't just run around and wait for someone to give him a pass to score a goal. He works a lot for the team as well and he creates chances.

"He's in the right place at the right time, as he showed last year in LaLiga. I played there for two years and I know it's not that easy to score many goals in LaLiga, because you have great defenders there as well.

"I think he's going to help the team a lot."

Mustafi is expected to make his Arsenal debut against Southampton this weekend despite suffering an ankle injury scare on international duty with Germany, while Perez is also in line to make his competitive Gunners bow.