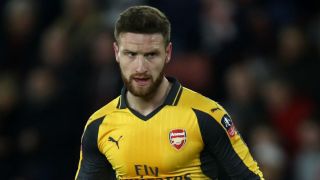 Shkodran Mustafi is aiming to maintain his unbeaten run in an Arsenal shirt right through until the end of the season.

The German centre-back, who joined the club from Valencia in August, has been somewhat of a good luck charm for Arsene Wenger's side this term, with all four of their defeats coming in his absence.

And while the 24-year-old understands that maintaining that record for the remainder of the campaign will be tough, he does believe it is achievable.

"I hope I can keep that statistic until the end of the season," he told Sky Sports News.

"It'll be difficult, but I just go from game to game and try to give the maximum and improve, then the results come.

"When I lose I sometimes just don't come home and stay at the hotel, because I don't want to listen to all that. But I'm happier for the other people than me that I haven't lost yet.

"When I go into a game I'm not thinking about losing, I'm there because I want to win. If I do something I do it properly, I'm a footballer because I want to improve and win games, that's why I'm sometimes difficult when I lose."

Back-to-back defeats to Manchester City and Everton in December threatened to derail Arsenal's title challenge, but four league wins out of five since then have moved them back up to second place, eight points behind leaders Chelsea.

Should Antonio Conte's side slip up against Liverpool at Anfield on Tuesday, the Gunners could close the gap with a win against struggling Watford, but Mustafi says they are not going to be distracted by the teams around them.

"We are not looking too much at the other teams and what they're doing," he added.

"In the end you have to be focused on what you're doing as a team. We know we have big games coming up and we have to go game after game.

"We know the Premier League isn't easy, all the teams know how to defend and they can catch and hurt you on the counter-attack. Suddenly then you're looking at other teams, but dropping points as well, so it's important to look at ourselves and try to take all the points we can."