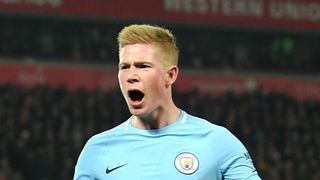 Shkodran Mustafi said Arsenal must nullify Kevin De Bruyne's impact if the Londoners are to upstage Manchester City in the EFL Cup final.

Arsenal and runaway Premier League leaders City will do battle at Wembley Sunday, with all eyes on in-form playmaker De Bruyne.

De Bruyne has starred for City this season, leading to manager Pep Guardiola to talk up the Belgium international as a potential Ballon d'Or winner.

Arsenal defender Mustafi is aware of the threat De Bruyne poses to the Gunners.

"It will be very important to try and stop his qualities because players like him can make things happen.

"We have to try and make everything as compact as we can, give them as little time on the ball as we can."

Arsenal, who are sixth and well off the pace in the Premier League, head into the decider following an embarrassing result in the Europa League.

Arsene Wenger's men earned a last-16 meeting with AC Milan via a 4-2 aggregate win over Ostersunds but Arsenal were sensationally humbled 2-1 in Thursday's return leg at the Emirates Stadium.

Arsenal drew scathing criticism after the performance against the unheralded Swedish side but Mustafi defended his team, pointing to their semi-final win over Chelsea in the EFL Cup.

"We had a good solid game against Chelsea away and then at home we knew that we were strong enough to beat them," he said. "We showed character coming back from 1-0 down to win the game.

"I know that everyone in our dressing room wants to win games and is not happy to lose. That’s why this season we have come back in matches from being 1-0 or 2-0 down, or even like last year when we came back from 3-0 down against Bournemouth.

"It shows we have character in the dressing room and we will always give everything for this club."