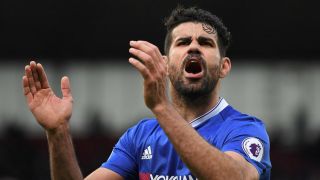 Diego Costa said his goals have been pivotal in Chelsea's push for a domestic double in Antonio Conte's first season at the helm.

The Spain striker has netted 19 times in 32 Premier League outings this term and his double against Southampton last month saw him surpass 50 top-flight strikes for the Blues.

Chelsea – who secured an FA Cup final spot by beating Tottenham 4-2 in April – will move seven points clear at the summit with a win over Middlesbrough on Monday and Costa knows how valuable his contribution has been as he eyes the 20-goal mark.

"Twenty is a good, solid total. Any club with a striker who is going to get 20 goals regularly, they are going to be up there competing for whatever competition they are involved in," the 28-year-old told Chelsea's official website.

"That is why I am looking for that consistency, that regularity of scoring, one goal every game or every other game rather than getting three or four and then having a drought.

"But with 20 I am happy. I did it in the first season at Chelsea, when we were champions, and if I get 19 or 20 this season and we turn out to be champions then great, it means something and it is for something."

Costa has been linked with a mega-money move to Tianjin Quanjian, although the Chinese Super League club released a statement this week insisting they had "not been communicating with Diego Costa regarding the transfer".