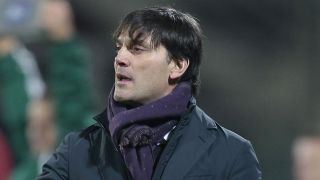 Vincenzo Montella has vowed to do all he can to '"fix" AC Milan, but insists there will be no major overhaul of the playing squad.

Montella is the latest man tasked with restoring Milan to the higher echelons of Italian and European football, with the likes of Clarence Seedorf, Filippo Inzaghi and Sinisa Mihajlovic all having been deemed incapable of doing so by the club's hierarchy.

Last season was another disappointing campaign for the Rossoneri, who finished seventh in Serie A and failed to qualify for Europe.

And Montella, who left his position at Sampdoria to move to San Siro, says it is time for Milan to realise their shortcomings and promised to find a solution.

"If the team didn't reach Europe that means that the team was not working perfectly like it should have. These are the things I'm going to be focusing on," Montella said at his first news conference as Milan coach.

"The minimum goal is to get into Europe, this is our duty.  Something has to be fixed and my job is to try and do that in the best possible way."

Despite Milan's failings last season, Montella insists there is a clean slate for everyone at the club, and also played down suggestions he will raid former club Fiorentina for Borja Valero.

"We'll look out for players who fit in with the way I play. My job is to give direction, after that the team will choose the players they consider right for the job, both technically and financially," Montella added.

"We're not in a hurry. The first thing we have to do is evaluate the entire squad without prejudice. Once we've done this, we'll have a better idea of who we need to focus on for the next season.

"I have never spoken with Milan about this player. Borja Valero is a player I like, of course, but everything depends on the opportunities offered by the market.

"If I could choose, it would of course be better to hire players who already know the way I work."