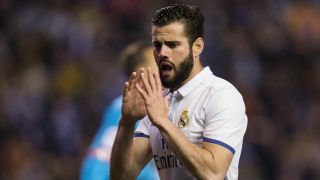 Real Madrid have won their appeal against Nacho's suspension and are subsequently able to play the defender in their crucial La Liga away match against Celta Vigo on Wednesday.

Nacho had been given his fifth yellow card of the season during Sunday's 4-1 home victory over Sevilla, despite not having committed an obvious offence.

Madrid disagreed with the award and opted to challenge the decision with the Spanish Football Federation's (RFEF) appeals committee.

And the RFEF upheld the appeal from Zinedine Zidane's side, meaning the 27-year-old is an option for the Real Madrid boss having been included in his 20-man squad to travel to the Celta game.

"I believe that I didn't do anything and hopefully they can take away this card - it was a strange occurrence," Nacho had told reporters after facing Sevilla.

Nacho's inclusion against Celta is a boost with defenders Dani Carvajal and Pepe already ruled out through injury, as are attacking stars James Rodriguez and Gareth Bale.

Madrid are behind leaders Barcelona by virtue of their weaker head-to-head record, but hold a game in hand and know four points from their games away to Celta and Malaga this week will be enough to give them a first league title since 2012.