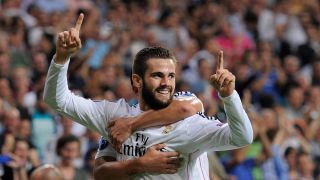 Last season, Real thrashed Schalke 9-2 on aggregate at the same stage of the competition on their way to an unprecedented 10th Champions League/European Cup title.

Based on that result, Nacho claimed Real are confident of scoring away to Schalke again this week.

"Of course. We know the potential we've got, whether we're playing home or away," he told Marca on Monday

"We know that the players we have up front offer us so much. If I had to wager, I'd bet on Real Madrid scoring."

The aggregate victory last year included a 6-1 triumph at Schalke's Veltins Arena and Nacho, who played in the 3-1 second leg win but missed the match in Germany, claimed that the Bundesliga club are probably "still smarting" from their home loss.

"The Veltins Arena is a fantastic ground where the crowd really get behind their team and cheer them on. It gives you that extra motivation to play a good game and get a positive result," Nacho said.

"Schalke are surely still smarting [from the 6-1 loss at home] and will be fired up to get revenge for last year's result."

Nacho has missed just nine minutes of Real's past three matches in La Liga and looks set to start against Schalke but, for a 25-year-old with only five previous Champions League starts, to make such comments could be considered cheeky.

But he was not the only confident individual on Monday with Sam hinting that Real are defensively frail.

Schalke may have been held scoreless by Eintracht Frankfurt on Saturday but Real have only kept one clean sheet in their past five games - on Saturday against Deportivo La Coruna - and Sam is convinced the home side will have chances to strike against their Spanish opponents.

"They have a world class squad full of big names like Cristiano Ronaldo, Gareth Bale, Karim Benzema and many more," the 27-year-old German told Schalke's website.

"[But] if we defend in a compact manner, we will make life difficult for any team in the world.

"We have good players too. I'm certain that we're going to have chances."

Sam played down his team's failure to score against Frankfurt, maintaining Schalke created enough opportunities to win the game.

"We played well before the break and had chances but we weren't clinical enough," he said.