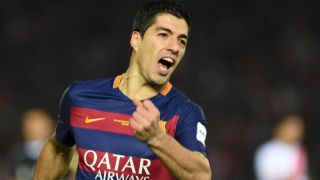 Sosa, who played for the likes of Lazio, Inter and Borussia Dortmund in the late 1980s and early 90s, was the forward coach at Nacional when Suarez made his senior debut.

"[Nacional] wanted to send Luis Suarez home at the start because he didn't score any goals in his first five games," the 49-year-old said.

"But how Uruguayans are, here there are more coaches than players, and they said he couldn't, that he wouldn't score many goals...and he was missing five or six chances each game.

"But he was a kid who kept shooting at goal or heading the ball, he never wanted to leave training."

His hard work paid off and after one goal went in more started to follow, with Suarez going on to score 10 in the 2005-06 season as Nacional claimed the Uruguayan title.

His performances saw him attract attention from several European clubs before signing with Groningen in the Dutch Eredivisie, with Suarez now starring for Barcelona after stints at Ajax and Liverpool.

"He's one of the best players in the world now."