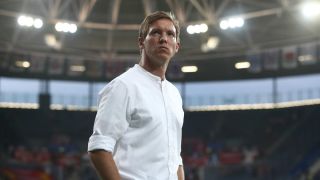 Hoffenheim coach Julian Nagelsmann has revealed he is open to managing Bayern Munich because of the affinity he has for the city.

Nagelsmann, 30, has long received acclaim for his accomplishments with Hoffenheim despite being particularly young compared to most head coaches.

He led Hoffenheim to a fourth-place finish in last season's Bundesliga and only failed to qualify for the Champions League group stage because they came up against a strong Liverpool side.

Nagelsmann has been strongly linked to take over from Carlo Ancelotti at the Allianz Arena when the Italian leaves, and his revelation that he sees the area as "home" will surely only increase the speculation.

He told Eurosport: "Well, it [the city of Munich] is definitely of importance to me. I am from, or rather have lived, in Munich for many years.

"Originally I am from Landsberg am Lech, which isn't far away from Munich. My wife and my kid are going to move to Munich soon, we are building a house; therefore we do have a close bond to this area. It is our home.

"And even if I am not going to coach Bayern, I will still be a happy person whenever I do die. I am very, very happy with my life.

"And Bayern might even make me a little happier, but that doesn't say that my happiness depends on Bayern."