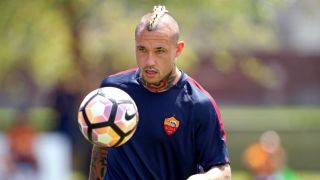 Radja Nainggolan recognises that Juventus' lavish recruitment drive leaves the champions in a strong position to defend the Serie A title, but insists Roma can mount a credible challenge.

Juve won a fifth consecutive Scudetto last term and have strengthened again during the close-season by forking out €90million to sign Gonzalo Higuain from Napoli, while Miralem Pjanic joined from Roma and Medhi Benatia, Marko Pjaca and Dani Alves have all moved to Turin.

Roma lost just four times in the league last season, fewer than any other team, but 11 draws meant they were largely playing catch up and head coach Rudi Garcia was replaced by Luciano Spalletti.

However, the capital club won five straight games to end the campaign and secure a Champions League berth, and Nainggolan has challenged Roma to carry on that level of consistency.

"Of course, I think that Juve have had a great market with great continuity," the Belgium midfielder told Roma Radio.

"But in the end every team plays every team and the winner is the team that shows greatest continuity.

"In the last few years Juventus has always been ahead, but if we start this season how we finished the last then you never know where we can get."