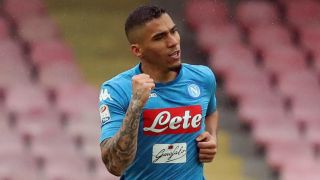 Napoli returned to the top of Serie A after battling to a 1-0 home victory against SPAL.

Juventus' derby win over Torino by the same scoreline earlier on Sunday temporarily sent the champions to the summit, but Allan's first-half strike at the San Paolo moved Napoli back above them by a point.

Maurizio Sarri's side were unsurprisingly dominant against a team which now has only three wins from 25 league matches, but they were short of their fluid best in a match that came just three days after their surprise 3-1 loss to RB Leipzig in the Europa League.

Allan struck just six minutes into the contest, completing a fine team move involving Jose Callejon with a cool finish inside the penalty area, but the home side struggled to kill off the visitors in the pouring Naples rain.

Marek Hamsik thought he had scored a second 64 minutes in when he headed home Allan's cross, only for a VAR referral to correctly rule the goal out for offside.

Dries Mertens curled a free-kick inches wide in the closing stages but SPAL offered little to suggest they would punish Napoli for their wastefulness, leaving them 18th in the table.

9 - have set their club record of consecutive wins in a single Serie A season (nine). Record. February 18, 2018