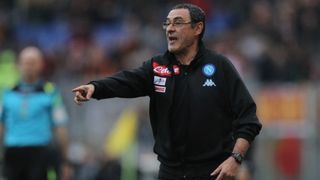 Gonzalo Higuain scored twice against his old side to ensure Juve made it to the final for the third year in a row, progressing 5-4 on aggregate after a chaotic match, but Napoli beat Juventus for the first time in four attempts this season.

Sarri believes his team's 3-1 deficit from February's first leg in Turin, in which Higuain was also on target, had left Napoli with too much to do.

"It was a great performance, we scored three goals against a side that usually concedes very few, but we were unable to overturn the first leg result," Sarri told Rai Sport.

"There are some regrets, at the end those 20 seconds in Turin where we could've gone 2-2 and instead went 3-1 down really made the difference.

"They made a big impact on the tie overall, naturally luck makes a difference in these situations.

"The good thing about these two games is that we are slowly closing the quality gap on Juventus."

3 - For the first time Juventus have reached the Coppa Italia final for three seasons in a row. Habit.April 5, 2017

Napoli had drawn with Juventus 1-1 at home in the league on Sunday, with Marek Hamsik cancelling out Sami Khedira's early opener.

"We need to finish the growth process in terms of character, maturity, tactics and concentration," Sarri added. "It's a team that overall seems to have grown a great deal already.

"On Sunday we caused huge problems for Juventus, tonight [Wednesday] we changed six or seven players and still caused them problems. That's positive.

"We had several players born in the 1990s and that too is positive. I think that over the course of this season, the team to have made life the most difficult for Juventus was us."

Lorenzo Insigne sparked hope of a dramatic Napoli fightback by scoring their third goal on the night and Sarri hopes the forward stays at the club for many years.

"The lad is now at the right age to mature as a person and a player," Sarri added. "He's a pure talent, I think the most talented right now in Italian football.

"For one reason or another he had some peaks and troughs last season, but for five or six months he has been remarkably consistent.

"He is destined to become great and I hope he can become a symbol who spends his career at Napoli."