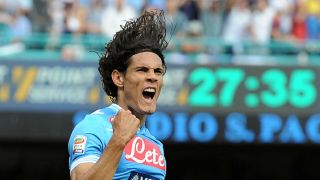 Carlo Ancelotti is not interested in continued speculation linking Paris Saint-Germain striker Edinson Cavani with a return to Napoli.

With PSG determined to retain Neymar and Kylian Mbappe but reportedly needing to raise funds, Cavani has been linked with a return to Serie A.

But Napoli president Aurelio De Laurentiis has suggested Cavani would need to halve his wages in order to return to the club, who he left for PSG in 2013.

And asked about the speculation at a media conference on Saturday, Ancelotti rejected reports Cavani is a top transfer target for Napoli.

"They are rumours that come from every market," Ancelotti said. "Then we get ready for January.

"But I have fantastic players and I'm lucky enough to train them, so I'm not interested in players from the other teams.

"I still haven't seen [Dries] Mertens, but in general all of the squad I have available has quality, is competitive, young and has great physical attributes.

"My impressions have been confirmed on this training camp. Other than the injuries to [Alex] Meret and [Piotr] Zielinski, everyone is available and I think this period will be very useful."

: "There's a calm atmosphere at the club and everyone is really motivated. I'm happy to work with . He knows his stuff. We talk about all sorts, including cinema"July 28, 2018

Goalkeeper Meret is out of action with a broken arm sustained in his first week of training at his new club, with Napoli linked with further reinforcements after last season's number one Pepe Reina signed for AC Milan.

Ancelotti will lead Napoli into their first Serie A game of the season at Lazio next month but the former Paris Saint-Germain, Chelsea and Real Madrid coach is not worried about the club's goalkeeper situation.

"Together with the club we are evaluating different situations, we are not in an emergency," Ancelotti added.

"There is a well-built team and in any case the market closes on August 17. There will still be some movement, but we will do everything with the right calm."