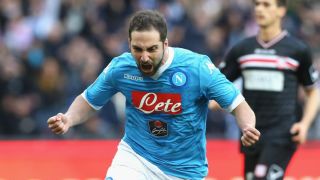 Napoli have insisted that Gonzalo Higuain has not asked to leave and say Juventus have not put in a request to sign him.

The Argentina international has been heavily linked with both Serie A champions Juve and Arsenal, with a €94million release clause reportedly tempting those clubs.

Higuain's brother and agent Nicolas said last month that his client would not be renewing his contract with last season's Serie A runners-up Napoli, which has two years left to run.

Despite the frenzied links with domestic rivals Juve, Napoli have stressed that little has changed regarding the 28-year-old striker, who scored a stunning 36 league goals in 2015-16.

"Gonzalo never said he wanted to leave," Napoli's head of communications Nicola Lombardo said at a Q&A with supporters at the club's training base in Dimaro.

"Juve have never asked for him and [President] Aurelio De Laurentiis does not want to sell him.

"We are talking about rumours that are fuelled by the press, who write story upon story. But he will be here in Dimaro to start pre-season on July 25."

Juve boss Massimiliano Allegri did little to dampen rumours of a swoop for Higuain when asked about the former Real Madrid star on Saturday, saying that "great players are always welcome" at his club.

The Turin side's director Fabio Paratici, meanwhile, hinted a move could be possible but stressed that no offers had yet been made.