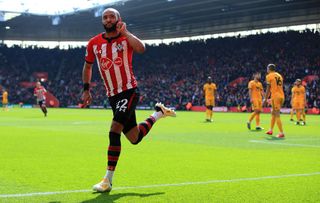 The Three Lions boss named a 27-man group ahead of this summer’s inaugural finals in Portugal, although he will need to cut the group down to 23 by May 27.

Unsurprisingly there are no uncapped players in Southgate’s selection, but there is a shock call-up for Redmond.

Overlooked since winning his one and only England cap in March 2017, the 25-year-old scooped the Player of the Year double at Saints’ end of year awards after a fine campaign.

England captain Harry Kane has been selected by Southgate despite an ankle ligament injury, while Harry Winks has also got the nod after groin surgery.

There is no place for Ruben Loftus-Cheek after sustaining a nasty-looking ankle injury playing in a friendly for Chelsea on Wednesday, while fellow midfielders Declan Rice and James Ward-Prowse are involved again.

Jesse Lingard and Joe Gomez return to the squad, while Luke Shaw and James Tarkowski are left out.

Southgate believes Redmond deserved his return to the England fold after the winger scored nine goals in the second half of the season.

Speaking at a press conference, the England manager said: “I think he finished the season really well. I think the new manager has had a positive effect: a lot of pace, playing the high press and has started to score more regularly.

“It is a really good opportunity for Nathan.”

Southgate also explained his reasons for including Kane and Winks, despite the Tottenham duo currently being sidelined by injury.

“For the likes of Harry Winks, he deserves to named in the initial squad. It is a case that he hasn’t played for a couple of months so we will have to see,” Southgate said.

“That’s (Kane’s fitness) one of the unknowns. He’s working to be fit for the (Champions League) final. We are keeping that door open. We are going to look post-Champions League final. There is the physical aspect and emotional aspect of that final that we have to look at.

“I don’t think we have had a time where we haven’t had a lot of pullouts but we have a really strong squad. We will know more by that date (May 27) but we can make changes after that date.”

Southgate was positive in how the impact of his players featuring in the Champions League and Europa League finals can have on his team in the future.

He said: “In the long-term for England, it’s brilliant. All of these experiences are what this team hasn’t had before.

“It’s been an incredible couple of weeks for English football and we are looking forward to continuing that.”

But when asked if it was a tough choice, Southgate said: “No. Ben Chilwell and Danny Rose have been excellent for us so they are ahead in the pecking order. But it gives us a lot of good options.”

The England manager also added that Chelsea pair Ruben Loftus-Cheek and Callum Hudson-Odoi would have been selected if they were fit.