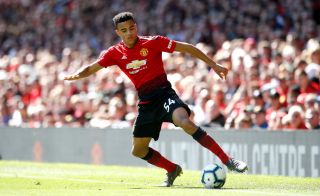 The 17-year-old sensation scored his first senior goal to set United on course to a 4-0 win in Perth, where the rivals’ first match since September 2011 had far more atmosphere and intensity that your standard pre-season friendly.

Greenwood looked sharped against SkyBet Championship promotion hopefuls Leeds, producing a performance that showed just why Solskjaer recently talked up his chances of starring at the club.

“We’re delighted with the goal he’s scored,” the Norwegian said.

“It’s important for strikers to get that goal, even though we’ve said, and we know, he’s capable of scoring goals. But that first goal is maybe going to be a weight off his shoulders.

“I think his movement, his cleverness…. he’s going to be a very good player, the young boy.

“He can play all front-four positions: he can play 10, seven, 11, nine, so he’s a natural footballer, and with his left foot coming in, he can play anywhere along the frontline.

“He’s a natural and when he takes a penalty (he can take it) with his right, he takes it with his left, free-kicks right, free-kick left, so he’s almost what you call 50-50.

“Maybe 51-49 left-footed, and you see a talented boy there. He has got every opportunity to make it as a Man United player.

“Of course, it’s also going to be about luck, staying clear of injuries, being professional, and I’m sure he’s going to grab his chance because he’s got everything there for him.”

Asked if Greenwood could start next month’s Premier League opener against Chelsea despite his age, Solskjaer said: “He’s got a chance to start that one. Yeah, definitely.

“He’s capable, more than capable, and he’ll always be there, in and around the box creating chances, and I won’t say that’s not a possibility.

“No, it’s a good possibility if he keeps going as he does. Difficult to keep players out that perform well.”

Marcus Rashford, Phil Jones and Anthony Martial also scored in a 4-0 defeat of old foes Leeds in the final match in Australia before heading to Singapore to take on Inter Milan – the side aiming to sign Lukaku this summer.

The 26-year-old was conspicuous by his absence again after picking up another knock on the eve of the game.

Romelu Lukaku, who is being linked with a move to Inter Milan, did not play against Leeds due to injury. (Martin Rickett/PA)

“Of course, it’s not ideal when you miss training sessions,” Solskjaer said. “He missed yesterday’s or towards the end of a session, then he missed a game again today.

“So, he’s missed two chances to play 45 minutes, and at this stage of the season it’s important for us that we get everyone fit, so hopefully he’ll be available soon.”

Unlike Solskjaer, Leeds boss Marcelo Bielsa did not attend the post-match press conference.

With the Argentinian busily analysing his side’s loss, assistant coach Diego Flores attended in his place.

“I think it was a difficult match,” he said. “There is a difference in quality in the players.

“They play better than us. We tried to do it. Maybe we had some moments that we could score but I think in the end they were superior to us.”