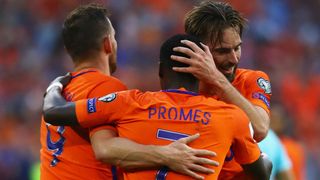 England, France, Germany and Spain are among the 12 teams confirmed as participants in the top division of the new UEFA Nations League competition.

Portugal, Belgium, Switzerland, Italy, Poland, Iceland and Croatia are also in League A.

The inclusion of Netherlands, who make the cut despite failing to qualify for Euro 2016 and the upcoming World Cup, may come as a surprise, the line-ups having been decided according to teams' position in the UEFA coefficient rankings as of October 11.

Scotland, Norway, Greece and Serbia are among 15 countries in League C, while the 16-team League D includes minnows like Liechtenstein, San Marino and Gibraltar, along with sides such as Belarus and Macedonia.

Each league will see the teams split into separate groups, with Leagues A and B splitting into four groups of three teams.

At the end of the first Nations League, teams will be promoted and relegated from each division.

Winners will be crowed at the Nations League finals in June 2019, while there is also a route to Euro 2020 available for the top-ranked teams in each of the four leagues who do not qualify for the competition in the regular qualifying groups.

The draw for specific groups in the Nations League, which will largely replace international friendlies, will be made on January 24, with the first games taking place next September.