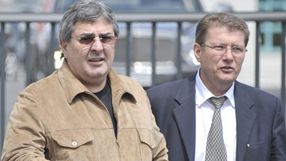 The Swiss league said it had asked the disciplinary committee to take action against the club over the missing documentation.

"The club has only partially replied to the supplementary information demanded on its financial situation after the takeover of the club by Bulat Chagaev," the league said in a statement.

It said the club's licence application for the current season had been made by the previous administration before the takeover.

Chechen-born Chagaev's first four months in charge have been tumultuous.

In addition to firing four coaches, Chagaev has parted company will all previous sponsors and dismissed the administrative staff, a decision which left Neuchatel unable to print tickets for the opening match of this season.

Neuchatel also announced this month that they were cutting ties with two of their supporters' clubs.

In another incident, it was widely reported in Swiss media that Chagaev burst into the dressing room with his bodyguards to admonish the players during a match against Lausanne Sport.