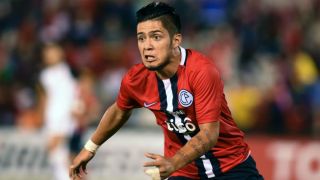 Teenage striker Sergio Diaz says he is determined to prove himself at Real Madrid after seemingly accepting an offer to join the club.

The European champions have reportedly struck a deal worth €5million to bring the 18-year-old from Cerro Porteno to the Santiago Bernabeu.

Although the transfer has not been formally confirmed, Diaz posted a farewell message to the Paraguayan club on Instagram at the weekend, saying he was excited to be moving to Madrid.

And the forward, who has earned the nickname 'the new Kun' in his homeland due to comparisons with Manchester City star Sergio Aguero, is eager to demonstrate his talent in Spain's top flight.

"I'm coming to the biggest club in the world to help and to show my talent, as I do in Paraguay. I will give every effort to do well," he told Marca.

"I don't know who [the reserves or the senior side] I will spend pre-season with, but I suppose they will tell me in the coming days.

"I've watched Zidane play since I was little and he's doing well as a coach. He won the Champions League even though he's only had a little time."

Diaz is expected to spend the majority of next season with the Castilla 'B' side.