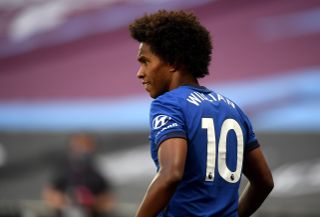 The Brazil forward revealed manager Arteta as the main reason he has joined the Gunners, after ending his seven-year stay at London rivals Chelsea.

Arsenal completed the signing of the 32-year-old on Friday on a three-year deal, with Willian quickly admitting former Manchester City assistant Arteta had sold him a bold vision for the Gunners’ future.

💬 "It is the character that I want. The kind of player that when things get difficult in the game that wants to take responsibility, wants the ball and wants to win the game for the team."— Arsenal (@Arsenal) August 14, 2020

“I decided to join the club because Arsenal is one of the biggest clubs in the world, and because of the new project with Arteta,” said Willian, who will wear the number 12 shirt at Arsenal.

“I think this club deserves to shine again, and I want to be a part of this project.

“With Arteta, I think Arsenal have a great opportunity to fight again for titles in the Premier League and in Europe.

“I am excited to start, I can’t wait to get on the pitch to do my thing to help my team-mates and the club to shine again.

“I talked to (Arteta) and the conversations were good. He gave me confidence to come to Arsenal, he said a lot of good things to me, and that’s why I have come to Arsenal.”

Willian helped Chelsea to two Premier League titles, one FA Cup triumph and the 2019 Europa League, when the Blues thumped Arsenal 4-1 in the Baku final.

But the 70-cap Brazil star was forced to watch from the stands as Arsenal edged out Chelsea 2-1 in this year’s FA Cup final, having been sidelined with an ankle problem.

Chelsea boss Frank Lampard had been clear all season that he wanted to keep Willian at Stamford Bridge, with the club offering him a two-year extension.

The Blues were unwilling to meet his demands for a three-year deal however, and now he has switched London allegiances.

Lampard admitted ahead of the FA Cup final that the Blues would have to accept Willian’s decision, even if that meant him playing for one of their main rivals next term.

Arsenal boss Arteta admitted he was impressed by Willian’s desire to join the north London club.

“I believe he’s a player that can really make a difference for us,” said Arteta.

“We have been monitoring him for the past few months, we had a clear intention to strengthen in the attacking midfielder and the winger positions. He is a player that gives us a lot of versatility, he can play in three or four different positions.

“He has the experience of everything in the football world but still has the ambition to come here and contribute to bring the club where it belongs.

“I have been really impressed with all the talks I have had with him and how much he wanted to come.”

Arsenal’s technical director Edu said: “I know him very well, since a long time ago because we’ve been working together for the Brazilian national team and of course I was following him because he played for another club.

“He has a lot of fantastic attributes as a person, as a football player of course, his character. I’m 100 per cent sure that everybody in the dressing room, the fans, myself and Mikel will enjoy having Willian in our side.”