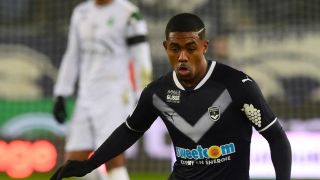 Gustavo Poyet was given assurances that in-demand forward Malcom would not be leaving Bordeaux prior to taking over as head coach of the Ligue 1 club.

Malcom has been heavily linked with Arsenal and Tottenham, though Arsene Wenger last week ruled out the Gunners moving for him in the January transfer window.

The Brazilian 22-year-old reignited speculation about his future by expressing a desire to play in the Premier League following Bordeaux's 1-0 victory over Nantes on Saturday.

However, Poyet, who was announced as the successor to the sacked Jocelyn Gourvennec at the weekend, has been told Malcom will not be going anywhere.

"The first thing I asked was if Malcom was staying. I was told yes," said Poyet.

"I said OK, now we can continue the discussion."

Bordeaux president Stephane Martin affirmed that position and has no issue with Malcom declaring an interest in playing in England.

"It has been said over and over that Malcom will not leave," said Martin.

"He said he wanted to play in the Premier League some day; it's normal – what player would not want to play in England?

"There is no problem with Malcom."