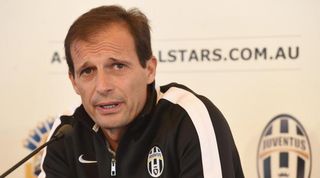 Juve get their season under way at Chievo, who crashed out of the Coppa Italia at the hands of Serie B side Pescara last week.

However, Allegri has warned his players to expect a tough encounter.

“We're ready to go and will play with great concentration and attention," he said. "It's not an easy one because Chievo have many new faces.

"Chievo will look to bounce back from their Coppa Italia elimination and cause us problems.

"It's a tricky encounter at a ground where getting a result is never easy. We need to be on our game for 95 minutes."

Allegri succeeded Antonio Conte, who has since assumed the reins of the Italian national team, and says he found Juventus in good order upon his arrival.

"I've come into an environment with rules, discipline and a strong work ethic," he continued. "I'm very happy about that."

But the new boss insists Serie A will be more than just a two-horse race.

"Juve and Roma aren't the only contenders," he added. Inter, Napoli, Fiorentina, Milan and Lazio will also be in the chasing pack."