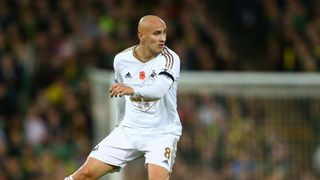 Newcastle are closing in on their second signing of the transfer window after agreeing a fee with Swansea for midfielder Jonjo Shelvey.

Shelvey, 23, has been an important figure for the Swans since joining from Liverpool in July 2013 but has failed to hold down a regular place in Alan Curtis' first-choice XI in recent weeks, having previously fallen from favour under Garry Monk prior to the manager's sacking in December.

He started Sunday's 3-2 FA Cup defeat at Oxford United but was involved in a verbal altercation with a supporter after the final whistle.

Omnisport understands Shelvey will have a medical on Tyneside on Tuesday afternoon after Newcastle agreed to pay a fee believed to be in the region of £12million.

Shelvey has made over 80 appearances for Swansea, with his form leading to an England recall for the 6-0 win over San Marino in September 2015.

And with the European Championship looming large at the end of the season, Curtis said at the weekend that the former Charlton Athletic man was eager to remain in the thoughts of national team coach Roy Hodgson.

Curtis said: "He wants first-team football. It is a big season, coming up into the Euros.

"We can't quite guarantee him first-team football at the moment."

Providing the medical is successful and the player agrees personal terms, then Shelvey would follow Senegal midfielder Henri Saivet into St James' Park.

The pair will be expected to bolster a Newcastle midfield which has looked short on quality since the departure of Yohan Cabaye to Paris Saint-Germain in January 2014.

Steve McClaren's men are 18th in the Premier League table ahead of Tuesday night's clash with Manchester United.