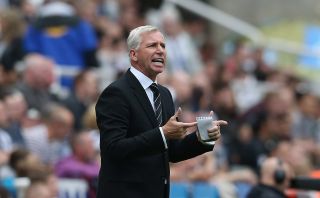 Pardew's men dominated for large periods in their opening home game of the season but were unable to break the deadlock, with Yoan Gouffran spurning their best chance from inside the six-yard box in the dying seconds.

Still, Pardew - who managed West Ham for three years between 2003 and 2006 - insisted that he was happy with Newcastle's performance, but knows that his squad is lacking creativity going forward.

"We looked as a defensive unit more disciplined, we looked more cohesive, I thought the back four were terrific," Pardew said.

"We had some positives, but it was in the offensive areas that you could tell we needed a little bit more, we needed a bit more options off the bench, so that probably swayed the result."

Pardew expressed his disappointment at Gouffran's late miss, but stressed that both he and the side are determined to give the fans plenty to cheer about this season.

"It was a shame because our fans deserved that today.

"The real strength of this club is our fan base, we need to give them a better season than we did last year and we're determined to do that."