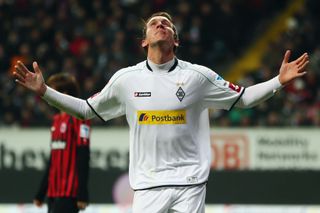 Alan Pardew is a long-term admirer of the Dutchman, and was reportedly close to sealing a deal in 2012 when De Jong was still at previous club FC Twente.

Newcastle have an option to make the move permanent at the end of the season, and the seven-time Netherlands international has high hopes after the switch.

De Jong said: "Newcastle is a great club and I have a good feeling about it.

"I am very impressed with the stadium and training ground and have been made to feel very welcome by everyone I have met.

"It has been a tough season for me so far but I am here to play games and want to be important for the team, and successful with goals and assists.

"I am really looking forward to playing for Newcastle."

The 23-year-old made the switch to the Bundesliga high-flyers in July 2012, after scoring 25 goals in 31 Eredivisie appearances in the previous campaign.

But De Jong has been unable to replicate that form in Germany's top flight, and all 13 of his appearances in the Bundesliga this season have come from the substitutes bench.

Newcastle are now giving the forward the chance to resurrect his career in the Premier League, and will compliment a strikeforce that includes the likes of Loic Remy, Papiss Cisse and Shola Ameobi at St James' Park.

His debut could come as early as Saturday, where De Jong would get his first taste of the Tyne-Wear derby against rivals Sunderland.

Pardew could further bolster his ranks before the close of the transfer window on Friday, with Newcastle thought to be interested in a deal for Lyon midfielder Clement Grenier.