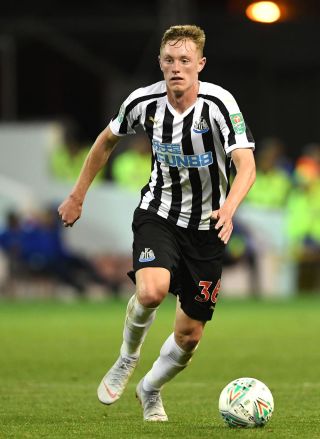 Newcastle boss Rafael Benitez has confirmed that Sean Longstaff is facing up to three months on the sidelines after seeing his impressive breakthrough season ended by injury.

The 21-year-old suffered cruciate ligament damage during last Saturday’s 2-0 Premier League defeat at West Ham and – while it is not extensive – he is unlikely to be fit again before the end of the current campaign.

Jonjo Shelvey, Mohamed Diame and Ki Sung-yueng will battle it out to replace him in midfield against Everton this weekend, but Benitez is confident Longstaff will be ready to stake his claim once again next season.

He said: “When you have an injury in your team, it’s always bad news. When you have a young player doing so well and he gets injured for the next months, it’s even worse.

“But to be fair, talking with him, he’s quite fine in terms of mentality, he’s strong enough.

“You can see talking with him now, ‘It happens in football’, he said, ‘and now I have to start working and trying to be fit as soon as possible’.

“His reaction has been very positive. Obviously we are really disappointed with the injury, but at least he’s taken it really well in terms of his approach.

“I don’t think he will have time (to return) this year because minimum, it could be around three months, but I think he will be fine. He has to compete next year with the other midfielders, for sure.”

Academy graduate Longstaff’s misfortune came following an impressive run of games after he was thrown in at the deep end with Shelvey, Diame and Ki all unavailable.

It is a measure of how well he has done that his absence for the remaining nine games of the campaign is being viewed as a significant blow on Tyneside.

He has played a key role in a recovery which has seen the club win their last four home league matches to edge towards top-flight safety, a sequence his team-mates will hope continues when the Toffees arrive at St James’ Park buoyed by last weekend’s goalless derby draw with Liverpool.

Everton boss Marco Silva has urged his players to treat every game like a cup final and, with Benitez having been sending out a similar message for some time, he is expecting a hard-fought encounter.

The Newcastle manager said: “They have some good players and if they approach the game with this mentality, it will be a tough, tough game.”