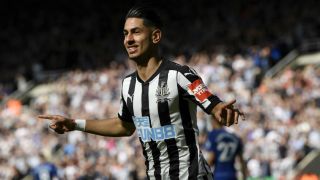 Chelsea produced an abject performance as they missed out on a place in next season's Champions League by going down 3-0 at Newcastle United on Sunday.

Antonio Conte's side went into their final Premier League match of the season needing a win and a slip-up from Liverpool to book a place in the top four, but the deposed champions failed to keep up their end of the bargain.

Liverpool's 4-0 victory over Brighton and Hove Albion meant Chelsea would have had to settle for Europa League football even if they left St James' Park with three points, but the limp nature of their performance will provide concerns ahead of the FA Cup final against Manchester United next weekend.

Conte, whose uncertain future at the club is expected to be clarified before the end of the month, suggested at his pre-match news conference that missing out on the top four would not hurt the Blues, and his team evidently lacked the desire to make a fist of a late challenge.

Chelsea failed to register a single shot at goal in the first half and Dwight Gayle gave Newcastle a deserved lead in the 23rd minute, putting Rafael Benitez on the path to a first Premier League win against one of his former clubs, as well as a 10th-place finish.

Gayle went off injured early in the second period but a four-minute double from Ayoze Perez saw the Magpies home for a comfortable victory, with FA Cup glory unlikely to be enough to remove the bitter taste for Chelsea and keep Conte at Stamford Bridge next season.

Our final Premier League game of the season ends in defeat. May 13, 2018

Thibaut Courtois returned to the line-up after missing the draw against Huddersfield Town in midweek with a back injury and was forced into action by Jonjo Shelvey and Mohamed Diame in the opening 10 minutes.

After Diame went close again, the Magpies finally got the goal they deserved when Jacob Murphy looped Matt Ritchie's delivery over Courtois, who clawed it off the line and onto the head of Gayle for a simple finish.

Chelsea offered minimal protection to Courtois. The goalkeeper kept out Gayle from 20 yards before Newcastle were denied two penalties by referee Martin Atkinson – claims for handball by Andreas Christensen and a challenge on Perez by Cesar Azpilicueta going ignored.

Chelsea finally got a shot on target in the 52nd minute, as a magnificent flick from Olivier Giroud was tipped over by Newcastle's on-loan keeper Martin Dubravka.

The Magpies doubled their lead before the hour mark, Shelvey firing Tiemoue Bakayoko's attempted clearance into the box, where Perez swept it into the bottom-left corner.

Dubravka did brilliantly to stop Ross Barkley – involved for the first time since January – finishing off a Chelsea counter-attack and Newcastle quickly extended their advantage.

Two in 4 minutes for Ayoze Perez puts Newcastle in control over ChelseaThey lead 3-0 after 66 minutesMay 13, 2018

Ritchie's deep, right-wing free-kick was sent back across goal by Florian Lejeune, enabling Perez to tap home from inside the six-yard box.

With an eye on the FA Cup final Chelsea withdrew Eden Hazard and Giroud as they fell to a defeat that brought a frustratingly inconsistent defence of their title to a disappointing end.