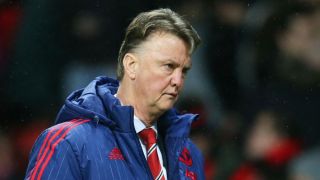 Manchester United manager Louis van Gaal is facing a selection headache in midfield ahead of the Premier League trip to Newcastle United.

Germany captain Bastian Schweinsteiger was a casualty of Saturday's laboured 1-0 FA Cup third-round win over Sheffield United at Old Trafford, jarring his knee in a challenge with Chris Basham.

Van Gaal does not expect the 31-year-old to be fit for the match at St James' Park and the manager will also monitor Morgan Schneiderlin, who was rested over the weekend following a heavy festive workload.

"Schneiderlin is not injured but he's in the red zone and had an overload," the Dutchman told reporters.

"In the Christmas period, he played every game and we have to take care of that. I don't take risks and, because of that, we have a very young bench.

"I trust these players also because [Andreas] Pereira is coming in and was a very good substitute [against Sheffield United], I think.

"With our injuries and players in the red zone, we have to take care of it. I think we have done it well."

Michael Carrick and Ashley Young also sat out the FA Cup win and the challenging fitness situation could mean another outing in a deeper midfield role for Marouane Fellaini.

United needed a stoppage-time penalty from Wayne Rooney to see off their lower-league opponents last time out and Fellaini does not expect things to be any easier against a Newcastle side languishing in the bottom three and coming off four consecutive 1-0 losses in all competitions.

"Always in the Premier League and against lower league teams, the games are tough," Fellaini told MUTV. "There are often surprises."

"Tuesday against Newcastle will be tough, it is always tough there but we started the New Year well so we have to continue that."

The turgid fare on offer at Old Trafford on Saturday means Van Gaal is still struggling to win over the United faithful but victory in the north east would make it three out of three in 2016 following the eight-match winless run that wrapped up last year.

He felt criticism from fans during the 1-0 FA Cup loss at Watford was harsh and urged unity as his team chase a third Premier League home win of the season.

"Fifty thousand people have to get behind this team and support this team," he said.

"We have to stick together. I know it's difficult, it's difficult for all of us to show a little bit of patience, but there's work going on and Tuesday at home to Manchester United is the next challenge for us."