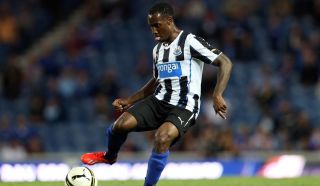 Alan Pardew's men were thrashed 6-0 when Brendan Rodgers' side last visited St James' Park in April, with Daniel Sturridge and Jordan Henderson both scoring twice on that occasion.

Liverpool have also started the new season in fine form and sit second in the table behind Arsenal having lost just once in their seven games so far.

Newcastle, on the other hand, have had an inconsistent opening to the campaign, although they picked up their third win of the season with a 2-1 success at Cardiff City last time out.

And Netherlands international Anita has insisted the memory of the April's mauling at the hands of Liverpool will serve to inspire him and his team-mates this weekend.

"The last game against Liverpool was obviously not good for us. We are in better shape and a better mood now," the former Ajax midfielder told The Chronicle.

"We have to put what happened to one side but we cannot completely forget what they did to us.

"It is now our turn to do it against them. I think both teams are actually better than last season. It is going to be a good game, a tough game, and one we are looking forward to."