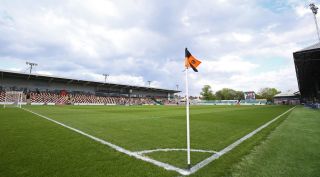 Newport have issued a supporter with a lifetime ban after he was found guilty of racist abuse.

The 40-year-old male has already been handed a four-year banning order by the courts for his offensive chants during Newport’s FA Cup game with Grimsby at Rodney Parade in November.

The Sky Bet League Two club said in a statement: “Newport welcome the court’s decision to impose a four-year football banning order on a person present in the home section, following an incident at our fixture at Rodney Parade earlier this season.

“In addition to the court-imposed football banning order, this person will also receive a lifetime ban from Newport and Rodney Parade Stadium.

“Discrimination has no place in any area of society and these actions have absolutely no place at our football club or among our fan base, either.

“Anyone who behaves in this manner, whether it be at the stadium, or online will receive a similar consequence.

“Newport work tirelessly to create an inclusive, welcoming environment for all and we would like to remind all supporters of our current policies and advise everyone to always behave in a respectable manner.”