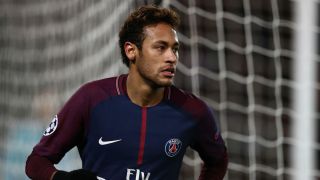 Thiago Silva has set the Coupe de France final as a possible return date for Neymar, should Paris Saint-Germain prevail from next month's last-four clash with Caen.

Brazil star Neymar underwent surgery on a broken metatarsal sustained at the end of February against Marseille and could be out of action for as long as three months.

That timescale would effectively rule him out of the remainder of PSG's season, while he would face a race to be at full match fitness for the start of Brazil's World Cup campaign in mid June.

Three-time defending champions PSG face Caen in the Coupe de France semi-finals on April 14 and, if they emerge victorious, Silva hopes his compatriot will return in time for the decider on May 8.

"I am waiting for the next week to speak with him," Silva said following Sunday's 2-1 win at Nice. "I think he is fine so far, he still needs to rest.

"Later, he could start working on his recovery. We are expecting him for the end of the season, maybe for the Coupe de France final, we will try to win this competition for him.

"I think if he is recovering well, maybe he could be back to play that Coupe de France final, which is important for the club."