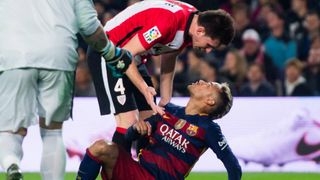 Aduriz believes Neymar has to change his attitude, with Bilbao players previously accusing the Brazil international of showboating and showing a lack of respect.

However, Neymar claims his style of play is always going to receive some hard tackles, and he refuses to change his approach to the game.

"I don't provoke, my style of play is to dribble. I am a forward and I can't ask to play centrally," he told BeIN Sports.

"The people who don't like football don't like dribbling, but for me it's fine. I don't care what they say because I have to help my team with dribbling and goals, that's what I have to do.

"To me Aduriz is a great player, a great leader, but I think he is wrong with what he said.

"I get knocked and kicked, and what can I do? I can't do anything, I can't hit back, it's not my way of playing.

"My way of playing is to dribble, my aim is to make goals and I think he has got a little wrong what he's said. But I respect him because he's a great forward.

The 23-year-old added: "When you can't catch a fast player or one who dribbles, there are tackles and there are kicks, and I am accustomed to that.

"I already know that inside the pitch, during a game, there will be hits and after you have to recover for the next game."