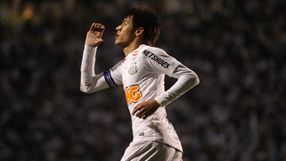 "I'm happy here in Brazil, I'm happy at Santos. I have a dream of playing in Europe, but it's still not the right moment," the Santos forward told Reuters in an interview.

The timing of a move to Europe can be critical for Brazilian players.

Many leave too soon, struggle to adapt abroad, are pushed into reserve teams and then see their careers go downhill as they are shunted around clubs on loan.

The biggest worry for Neymar, on the other hand, is that he could stay too long in Brazil where defences are generous in the amounts of space they offer and referees award free-kicks for the slightest of brushes.

Neymar struggled in arguably the two biggest games of his career, last year's Club World Cup final where Santos lost 4-0 to Barcelona and the Olympic Games final in August where Brazil were beaten 2-1 by Mexico.

He also had an unhappy experience at last year's Copa America where Brazil were knocked out in the quarter-finals by Paraguay.

Financially, there is little need for him to go abroad.

Although he could earn higher wages in Europe, in Brazil he has 11 sponsorship contracts and a Neymar shop selling licensed products ranging from mouse pads to cushions and toys.

Children copy his distinctive Mohican hairstyle and he has 5.5 million followers on Twitter.

"I know they copy my hair, my way of doing things, almost everything, but I don't feel like a pop star," he said. "I'm happy with the affection because I was a fan, I'm still a fan today and I know what it's like to have an idol."

Neymar has made a big effort to calm his temper after being involved in an episode which resulted in Dorival Junior being fired as Santos coach two years ago.

Neymar, then 18, enraged the coach by questioning why he was not chosen to take a penalty. He was banned for the next match but when Dorival tried to extend the suspension, the Santos board fired the coach.

Often accused of being too individualistic and going to ground too easily, Neymar said he was a team player.

"I don't feel like the big star," he said. "Everyone plays their part. If they play the ball to me but nobody else moves, I'm not going to be able to dribble past my marker. It's a collective sport."

"[Responsibility] is always divided," he added. "Everybody does their part on the pitch. One man can't do it alone. In the World Cup there will be 23 determined players, looking for the win. I will be just one more Brazilian, chasing after the title."

After two years of experimenting, often with unconvincing results, Neymar believes Brazil are managing to move away from the physical, counter-attacking game they played at the 2010 World Cup and find their own style.

"The national team is on a very good upwards curve," he said. "We are