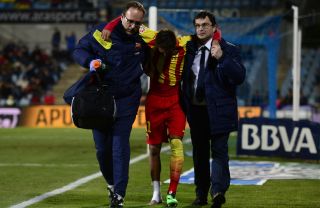 The 21-year-old was hurt as he fell awkwardly when delivering a cross during the first half of Thursday's Copa del Rey second-leg tie at Getafe.

Neymar was clearly in pain and unable to put weight on his injured leg as he was helped from the field by medical staff.

Camp Nou officials confirmed afterwards that he had suffered a sprained the peroneal tendon in his right ankle.

The injury could keep him out of Barcelona's UEFA Champions League knockout clash with Manchester City - the first leg of which is at the Etihad Stadium on February 18.