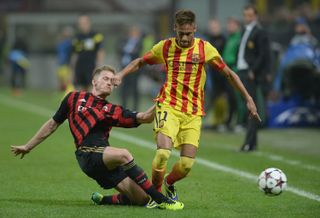 The Liga champions host rivals Real Madrid at Camp Nou in what will be their first meeting of the season.

Neymar, who featured for Santos in their three derbies against rivals Sao Paulo, Palmeiras and Corinthians, feels that experience will help him at the weekend.

"The one against Palmeiras was my first Clasico (in Brazil) and I played a good game," he explained to Barca's official website.

"It was a semi-final and we won and I put in a good performance.

"Later, against Corinthians, in a final which we lost. And against Sao Paulo, in a semi-final which we won and I had the joy of scoring three goals.

"There's a lot of rivalry. It's (the) only thing that's talked about in the week leading up to the game. It's the focus of the press and the fans."

The Brazil international has scored three times in 13 appearances since moving to Spain, helping Barcelona to the top of the table.

He went on to express his determination to make his Clasico debut a special occasion.

"This will be my first Clasico and I hope to have a great debut, preferably with a victory."

Barca have not beaten Real Madrid in their last five attempts, with their last win coming in August 2012.