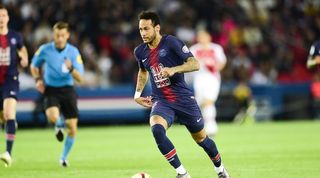 Hazard looks set for a move to Real Madrid this summer as he approaches the final year of his contract.

Neymar, who joined PSG from Barcelona in August 2017 for a world record €222 million fee, has also been linked with a switch to the Bernabeu.

When asked by Fox Sports about which player he would most like to play alongside, the Brazilian replied: "Hazard. He's a player that I think is different and he has a similar style to me."

The winger also looked back on his decision to leave Barça two years ago for the French capital.

"It was about looking for something new, to find new challenges," he said.

"Barcelona are a club that I'm in love with, even today.

"I still talk to my former team-mates, but I felt at that time that I was looking for something more difficult."

Neymar was ruled out of almost the entire second half of this season through injury, and defended himself from some of the criticism he received after being pictured at the Rio Carnival in his home country as he recovered.

"It was an exaggeration," he said. "I could walk and I was training for two months.

"What hurts most is to see senior players criticising me, because they played and did worse things than I do."

Quiz! Can you name the PFA Premier League Teams of the Year from the last decade?