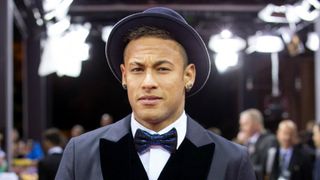 Neymar's father has laughed off suggestions that the Barcelona attacker and his entourage met with a Real Madrid delegation to discuss a potential transfer.

Spanish outlet Onda Cero claimed earlier this week that Neymar met with Madrid in Zurich before the FIFA Ballon d'Or gala, but the Brazil international's father has made it clear that there is no truth in those rumours.

"The report about a meeting between Real Madrid and us is a silly invention," Neymar Sr told El Mendo Deportivo.

"We were all staying in the same hotel before the ceremony, both the people from Barcelona and those from Madrid.

"We always greet everyone, but it is nonsense that there was a meeting."

The 23-year-old has also been linked with Manchester United and Paris Saint-Germain in recent months, but his father has stressed he has no intention of leaving Barcelona any time soon, while also making it clear he is the former Santos man's only representative.

"We have a contract with Barcelona... and Neymar is happy at this club," he added.

"I am Neymar's sole representative and the only one who can negotiate on his behalf."