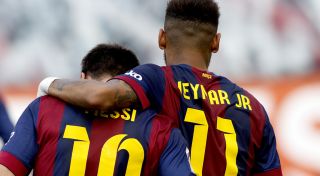 The two South American rivals will meet at the Beijing National Stadium this weekend for the first time since November 2012, with Neymar's Brazil having picked narrow wins over Colombia and Ecuador since their World Cup campaign on home soil ended.

Ahead of a fixture that will likely be treated more seriously than a standard friendly, Neymar warned of the threat Messi can pose.

"Playing alongside him is a great honour; he's the best player in the world," he explained to reporters in the Chinese capital.

"Playing against him is not pleasant.

"We hope that he has a bad day and doesn't see much of the ball. We all realise that we can't give him time to think or start his mazy runs.

"We basically can't let him do anything but we do have to win the game."

The fixture has attracted criticism in certain quarters for the amount of travelling required from the players.

Neymar feels Dunga's new-look Brazil squad are still in the process of adjusting as he attempts to rejuvenate the country's fortunes in his second spell in charge.

The 22-year-old is eager to spring what could be classed as a surprise result by winning the Superclasico de las Americas.

"It's difficult to say who is the favourite because Argentina have played together for some time and Brazil are reinventing the team," he added.

"They are two great teams who will do their best to win. I don't know if they’re more favourites than us but if so I hope to surprise the world."