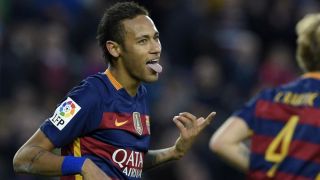 Barcelona vice-president Carles Vilarrubi has claimed the ongoing legal issues surrounding Neymar are unfair and quipped that the "machine" working against the Brazilian will soon link him to the assassination of former United States president John F. Kennedy.

Neymar has been ordered to appear in Spain's national court in February over allegations of fraud in relation to his transfer from Santos to Camp Nou.

Vilarrubi suggested the persecution being suffered by the 23-year-old means it will not be long until he is linked to Kennedy's murder in Dallas in 1963.

"Every day Neymar plays better and people enjoy his performances, it will be more complicated," the Barca executive told RAC-1.

"There is a machine that is working against him and I'm sure in the end they will say Neymar was in Dallas the day Kennedy was killed."

Vilarrubi offered words of support for Real Madrid and Atletico Madrid after the pair where handed bans from registering new players for the next two transfer windows as punishment for breaches "relating to the international transfer and registration of players under the age of 18".

Barca were found guilty of similar actions and only emerged from their ban this month.

"If Real Madrid and Atletico are really in the same situation that Barcelona was, the injustice is the same as it was for us," Vilarrubi said.

"In this case we must be supportive because the injustices are for everyone. Barcelona accepted it had committed an administrative error, but the sanction was disproportionate."