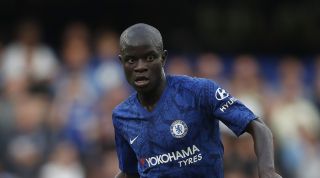 Real Madrid are weighing up a move for Chelsea midfielder N’Golo Kante and could include James Rodriguez as part of the deal.

Los Blancos are huge admirers of the France international, who has won a Premier League title with both Leicester and Chelsea.

Zinedine Zidane has set his sights on his compatriot as he seeks to rejuvenate his midfield next summer.

Madrid were heavily linked with both Paul Pogba and Christian Eriksen ahead of the 2019/20 campaign, but were ultimately unable to land either the Manchester United midfielder or the Tottenham playmaker.

And according to Spanish publication El Desmarque, the Spanish giants have now added Kante to their list of targets.

Madrid signed Thibaut Courtois from Chelsea in 2018, before prising Eden Hazard away from Stamford Bridge earlier this year.

And the 13-time European champions plan to return to west London once more, with Kante set to be one of their priorities at the end of the season.

Madrid are so determined to capture one of Europe’s leading ball-winners that they are reportedly prepared to submit an offer of £86m plus Rodriguez.

The Colombia international returned to the Santiago Bernabeu this summer after a two-season loan at Bayern Munich.

Atletico Madrid were close to snaring the playmaker away from their city rivals, before Florentino Perez pulled the plug on the deal.

Rodriguez has made seven appearances in La Liga and the Champions League so far this term, but Madrid are willing to sacrifice him if it helps them acquire Kante.

Chelsea are currently serving a two-window ban on registering new players after being found guilty of breaking FIFA regulations regarding the signing of under-18s from abroad.

That almost certainly rules out a January exit for Kante, but Madrid are prepared to wait until the summer to secure their man.