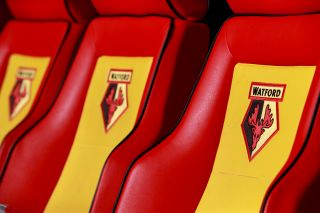 An NHS trust has thanked Watford after the Hornets enlisted the help of its staff to release the club’s new home kit.

Images shared by the club and trust show three members of staff from West Hertfordshire Hospitals NHS Trust stood on the pitch at Vicarage Road in the new Kelme strip.

The support we received from our neighbours @WatfordFC during the peak of the #pandemic was fantastic – now they have literally given us the shirts off their back! We were #BUZZING when they asked #TeamWestHerts staff to model their BRAND NEW KIT for the launch! #Watford#NHSpic.twitter.com/qCoeV3KPpn— West Herts Hospitals (@WestHertsNHS) August 14, 2020

“The support we received from our neighbours (Watford FC) during the peak of the pandemic was fantastic – now they have literally given us the shirts off their back,” the NHS trust tweeted.

In May, NHS staff gathered at Vicarage Road to clap the football club after they helped workers tackling the coronavirus crisis.

On April 17, the club had allowed their local trust’s NHS staff, including those at Watford General Hospital next to the stadium, to use their facilities – providing tens of thousands of free meals, meeting rooms and overnight accommodation.

The NHS trust said its staff were “buzzing” to model the club’s new kit.

Watford are preparing for the 2020-21 Sky Bet Championship season after their five-year stay in the Premier League came to an end with relegation in July.