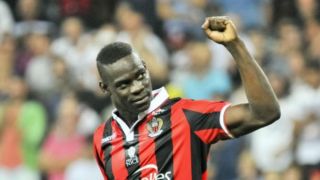 Mario Balotelli scored twice as Nice swept to another 4-0 victory over Ligue 1 champions Monaco in the Cote d'Azur derby.

Leonardo Jardim's side had appeared largely untroubled by a transfer window that included several high-profile departures, demolishing Marseille 6-1 before the international break, but one of those to leave - Allan Saint-Maximin – combined to fine effect with Balotelli to hand Monaco a first defeat of the season and end their record-breaking winning run in Ligue 1 at 16 games.

Balotelli opened the scoring from the penalty spot, before Saint-Maximin helped Alassane Plea double the advantage and the Italy striker tapped home after the break as Monaco wilted, Ignatius Ganago capping the win late on with a goal on his league debut.

Nice worked in swathes of space in Monaco's defence from the off, with Saint-Maximin putting Plea clear on goal in the fifth minute. Danijel Subasic saved but Nice kept the chance alive and were awarded a penalty when Fabinho tugged Balotelli to the floor.

Subasic guessed correctly, diving to his right, but Balotelli's firm effort found the net regardless.

Monaco's defending was again woeful as Saint-Maximin took the direct approach to send Plea in on goal and he kept his cool to curl past Subasic.

Balotelli escaped the attention of Fabinho to tap in just before the hour, while a standing ovation and handshake from coach Lucien Favre to greet his 74th-minute withdrawal was in stark contrast to the public dressing down the striker received after an insipid showing against Napoli in the Champions League last month.

Favre had pointedly hailed the performance of Ganago in Balotelli's stead in that game and the 18-year-old made another impact from the bench as, Monaco, who were kept off the scoresheet for the first time in 37 Ligue 1 games, again allowed their man to run clear and finish as Nice repeated last season's scoreline against their near neighbours.