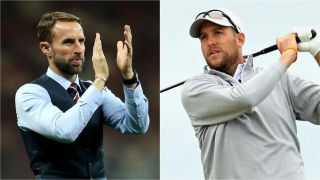 Matthew Southgate announced his wish to meet the England manager, his namesake, after his fine early play at the Scottish Open was greeted with cries of "Nice shot, Gareth".

Southgate is a household name in the United Kingdom, although it is Gareth, the Three Lions boss, and not golfer Matthew writing the headlines with a run to the last four of the World Cup.

However, just hours after England crashed out of the tournament, Matthew was out on the course at Gullane and emerging as the early leader after a five-under front nine.

And the surname he shares with the England manager did not go unnoticed.

"A few people were chucking out the 'Nice shot, Gareth', but I'm not sure Gareth threads it through linksy bunkers like I do with the driver," Southgate joked.

"I watched every minute [of the semi-final] and I'm obviously gutted with the result but not disappointed with their performance."

He added: "I've never met Gareth. I'd like to meet him. It's a complete coincidence, there's no connection, we're not related in any way."

"In international football you give everything for your country and play in a way that you hope connects with the fans."If we’ve brought joy back home – which I know we have – then that’s been worthwhile."July 12, 2018

Matthew was also happy to see the England team exit the World Cup with their reputations enhanced.

"Hopefully football will be coming home, just maybe a couple of years later than we wanted it to be," he said, referencing The Lightning Seeds' song.

"I don't think the guys can be too disappointed with the way that they played. It's lovely the way the country has got behind the team this time round. It makes a nice change, the media haven't hammered them for how they've played and everybody is really proud.

"I think there's 20 or 30 guys getting on a plane home from Russia that can all hold their heads high."