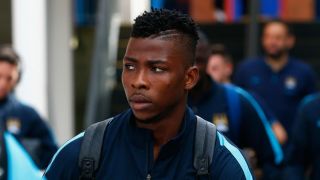 Sunday Oliseh believes his Nigeria players are ready to put a lacklustre outing in Swaziland behind them as they aim to secure a place in the group stage of Africa's World Cup qualifying section.

Despite being widely expected to defeat the team ranked 130th in the world in Friday's first leg on the artificial turf of the Somholo National Stadium, Nigeria returned home with a goalless draw to take into Tuesday's return.

"It was a game that we went all out to win," former Ajax and Borussia Dortmund midfielder Oliseh told Super Sport.

"Unfortunately, we didn't get that but we thank God that at least we have made everything open for ourselves to just win on Tuesday and qualify.

"We want to qualify and we will be going all out to win. So far, I have been impressed with the boys and the intensity of training.

"Hopefully, we get the win that we will be pushing for on Tuesday."

Oliseh has decisions to make up front, after recalled forward Obafemi Martins and Manchester City youngster Kelechi Iheanacho – the latter on his full international debut – came off the bench to revitalise Nigeria's attacking efforts in Lobamba.

The coach must also do without Rabiu Ibrahim, the midfielder who limped out of the action on Friday due to a knee injury after coming on as a half-time substitute.

"Yes, he has been ruled out. He will not play," Oliseh confirmed. "Rabiu got onto the pitch and unfortunately hurt his knee after a few minutes.

"He felt some pain and I thought it wise to substitute him. Ordinarily, he would have finished the game.

"It was saddening because it destabilized our [final] push. We wanted to win the game."

Despite overseeing a home performance overwhelmingly focused on defence, Swaziland coach Harris Bulunga hinted towards a more expansive approach in the second leg after being unimpressed by Nigeria's own attacking intent.

"Yes, of course we were playing at home, the first half we wanted to see how they came to meet us but we discovered that they were not that aggressive," Bulunga said, as quoted by Nigerian newspaper the Nation.

"It is not about them in their home because a score draw can put us through."

Bulunga will run the rule over Felix Badenhorst, Micolisi Lukhele and Mthunzi Mkhontfo after the trio were substituted as a precaution during the first match.

He added: "If the players who got some knocks and had to be substituted will be available, then I will give my team a 40 per cent chance of getting an upset result in Nigeria."