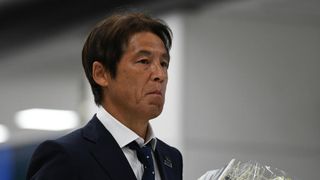 Akira Nishino will not be given a new contract, the Japan Football Association (JFA) has confirmed.

Nishino was given a short-term contract when he took over from Vahid Halilhodzic two months before the World Cup.

Japan qualified from the group stage and led 2-0 against Belgium in the last 16 before succumbing to a late comeback.

But the JFA announced on Thursday when the team returned from Russia that Nishino's deal will not be extended.

"It's disappointing to be coming home while the World Cup is still going on," Nishino said at a news conference.

"Four years from now we want to reach the quarter-finals. I feel the players will be able to achieve that after what we have accomplished with this result. I want people to believe that the players can do it.

Nishino's successor will be without Keisuke Honda and Japan captain Makoto Hasebe, both of whom have retired from international football.