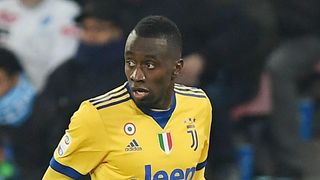 Cagliari will receive no punishment after Juventus midfielder Blaise Matuidi said he was targeted by racist abuse during Saturday's Serie A game at the Sardegna Arena.

Matuidi hit out at "weak people" who "intimidate with hate" in a Facebook post after Federico Bernardeschi's goal earned the champions a 1-0 win.

Although Cagliari issued a direct apology to Matuidi via social media – which the French midfielder acknowledged – the club will not face sanctions over the incident.

Serie A confirmed in a disciplinary report released on Tuesday that Cagliari cannot be punished as the match referee did not hear the alleged racist chanting.

"Those expressions were not heard by either the match referee, nor by the employees Federal Public Prosecutor's Office, nor by the GOS [Operational Safety Group] as per the reports filed with his office," the league's statement said.

"Therefore, with regard to article 11 paragraph 3 of the laws, no sanction can be brought."

Matuidi was also targeted by racist chants in a game against Verona on December 30.

Verona were handed a €20,000 fine and a partial stadium ban, suspended for a year, as a result of the abuse aimed at Matuidi.